As a CSAT, I specialise in helping dogs with separation issues overcome their anxiety when they are left alone at home.  As much as I love helping these pups get better, I often wish that my job was not necessary and that these dogs did not have separation issues in the first place. There are many things that an owner can do to help prevent the dog developing this disorder in the first place. That being said, I must warn you that prevention may not always be possible. Like many other behaviour issues, the onset of separation anxiety can be sudden and without warning and we do not really know what causes it in some dogs but not in others. For example, a sudden traumatic event such as being frightened by loud noises when home alone or a sudden change in routine may bring on separation anxiety in a dog who has never shown symptoms before, whereas another dog will just shrug it off and go back to sleep on the sofa. However, there are some steps we can take which leads to preventing separation anxiety in dogs.

Also, taking steps to prevent separation anxiety is generally much more effective in puppies when compared to an older dog who may already have developed some resistance to being left alone. If you are one of those amazing people who has adopted your dog from a rescue centre, you may find that he or she may already have issues with separation anxiety which has found to be common in rescue dogs.

One thing to be absolutely clear about is that separation anxiety is rarely an owner’s fault – some dogs are just more susceptible to developing the disorder than others in the same way as some people are more likely to develop clinical depression than others.

However, it is imperative that if your dog has developed this disorder you seek help straight away. Separation anxiety rarely gets better by itself. Don’t leave the dog to ‘cry it out’ – it doesn’t work and why on earth would anyone want their beloved friend to suffer when there is help available.

If you have a young puppy or a new dog, the best way to prevent separation anxiety is to train them slowly to cope with being alone.

First of all, give them time (at least one week) to get used to their new home and new family. New things, places and people can be scary and dogs need time to adapt. During the first week do not leave them alone. After the first week set yourself a plan of increasing absences very gradually – just a few seconds in another room with the door shut – and build up from there.

I often hear people say that they started with a short time – 10 minutes! This may feel short to us but to a puppy or dog in a new home, this can feel like eternity. A short time is seconds, not minutes.

Build up alone time inside the house first and then outside – leave the house for just a few seconds and then come back – slowly (over a couple of weeks) build up the time your dog is alone. 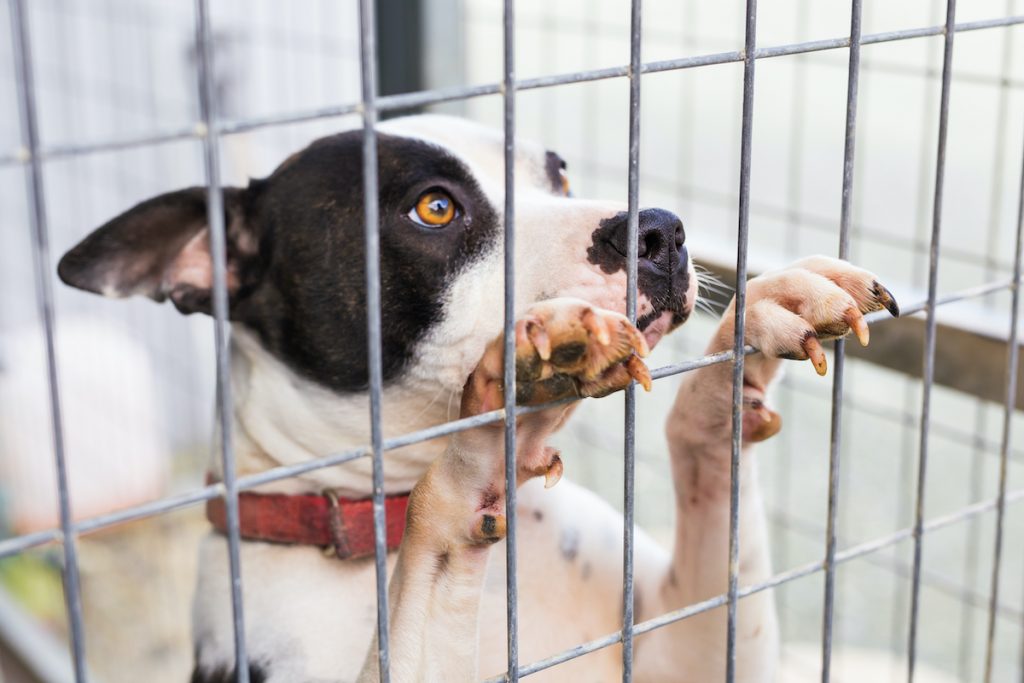 Should my dog be in a crate?

The answer is a resounding no! unless there is good reason. Puppies often have to be confined to a crate or pen to prevent them from chewing clothing, furniture, electrical cables or anything else you do not want destroyed. For pups, you need to train them to like their crate or pen FIRST before starting any absences.

Feed your pup in his crate/pen, put his favourite toys in there. When it is nap time put him in the crate to sleep. Make his crate/pen the best and safest place imaginable. Then start to close the door, just for a few seconds, then for a little longer and then with you out of sight

For an older dog who no longer destroys things for fun, it is better not to confine him. Dogs do much better when they have the run of the house – it prevents them from feeling trapped. If necessary close off some doors but make sure he has access to food and water and a comfy bed and that he has been to the toilet beforehand.

Don’t make a big thing about leaving the house. Leave the radio or TV on if you want to and give your dog a puzzle toy but don’t do this ONLY when you are leaving.

Dogs often find it more difficult to be alone is they are anticipating the ‘huge’ and exciting event of you returning home. Arrivals should be boring so that the dog does not get excited in anticipating your return as this makes your absence even harder to cope with. A comment I often get from clients is ‘my dog doesn’t love me anymore – all she did was open one eye when I came through the door’. Of course, I say this in jest because this is exactly the reaction that we want! 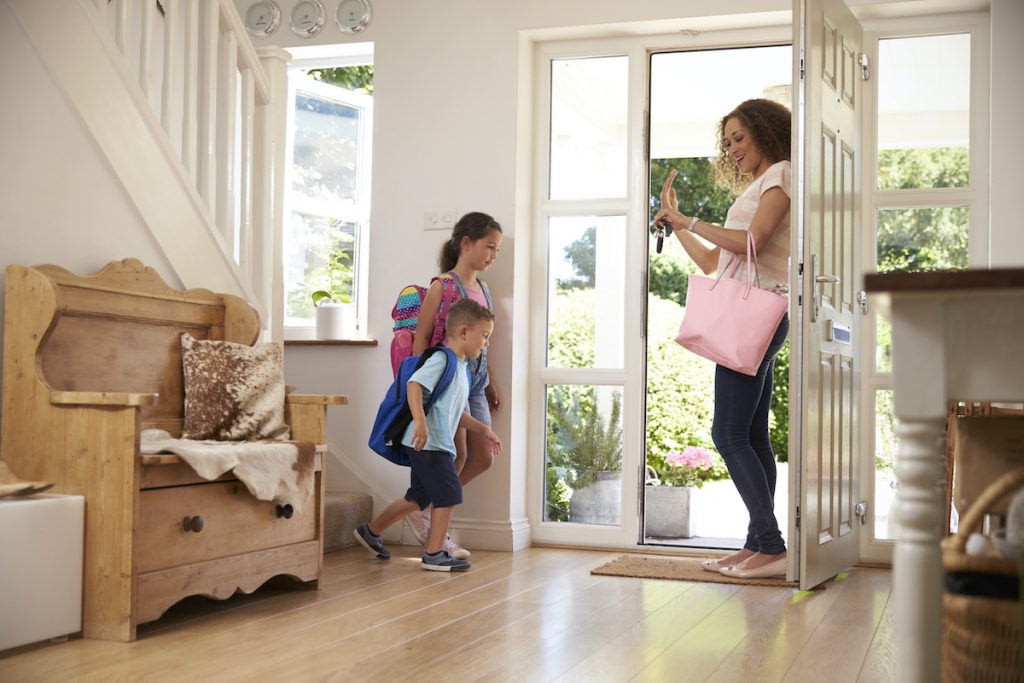 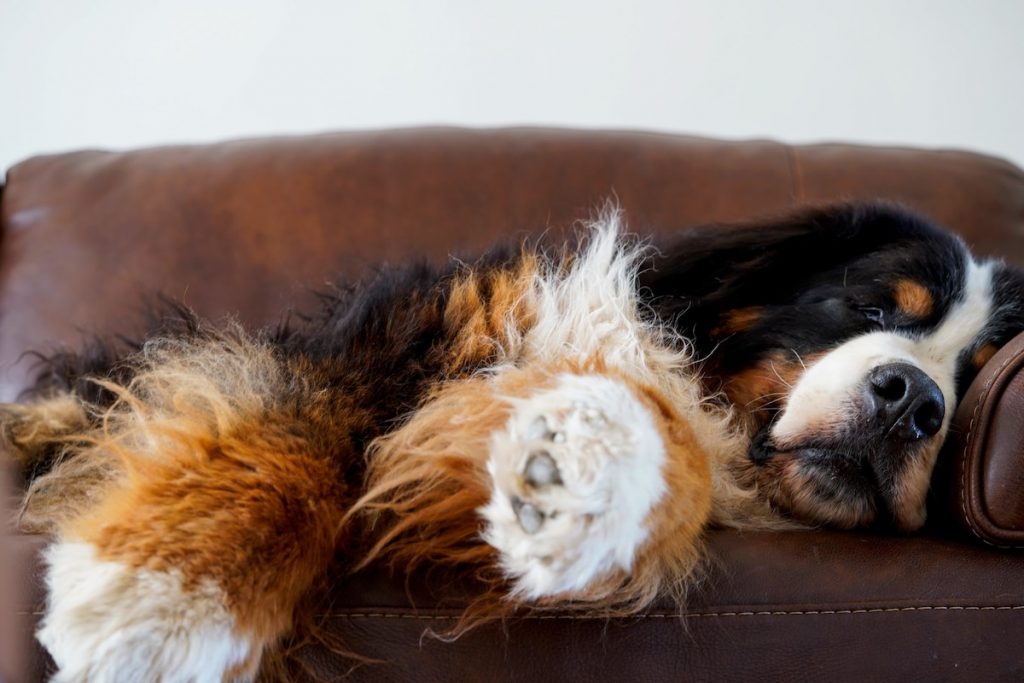 How do I know if my dog is comfortable being alone?

This is easy – watch him!  There are many inexpensive cameras on the market that work on wi fi.  Or you can just set up your laptop or tablet and use a video conferencing package such as Zoom or Skype.  In the early days of leaving your dog alone it is worth keeping an eye on him to make sure all is calm – not only is it worth doing for your dog’s benefit but you will have peace of mind too.

How Long Should I Leave My Dog Alone?

Dogs have basic needs, just like humans.  They need social interaction, they need to relieve themselves throughout the day, they need exercise and they need to be physically comfortable in their home.  Even if your dog can make it through a typical eight hour workday in a crate with no accidents, the real question is should they have to do that and the answer is no they shouldn’t!  Just because they are not barking or making a mess doesn’t mean they aren’t lonely or stressed.  Think about it in human terms – would you confine a human to a small space for that long every day, 5 days per week – I doubt it!    It depends on the dog but from a welfare point of view no dog should be left for more than 5 hours on a regular basis without a break. 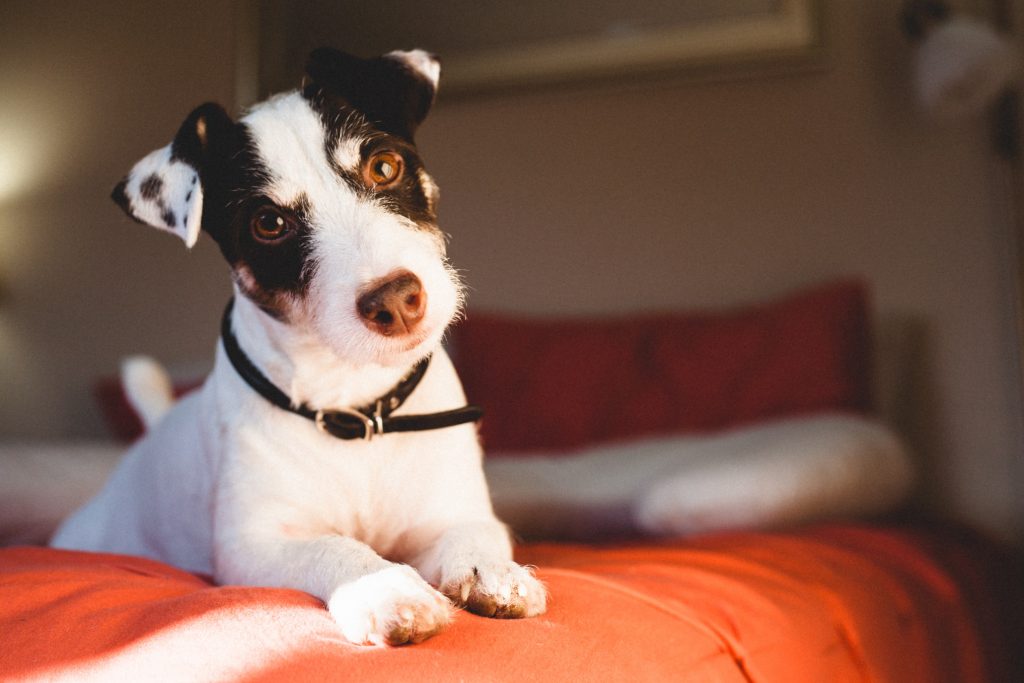 Consider the following options to help reduce the time your dog is alone:

Preventing Separation Anxiety in Dogs​ - Contact Me For Help

If you have questions about how to help prevent separation anxiety in dogs or how long your dog should be alone, please contact me! The expertise I can offer is priceless in helping your dog overcome his anxiety and knowing that there is a light at the end of the tunnel – your dog can be happy home alone.