Flo’s Journey – We Got There! 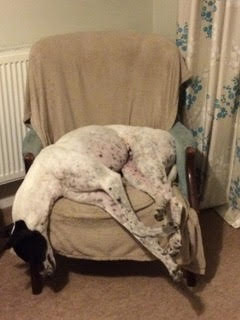 We adopted Flo, an ex-racing greyhound, direct from racing kennels when she was nearly 3. We were aware that greyhounds can be prone to separation anxiety so from day 1 we followed the usual advice. Despite our best efforts, it was soon clear that Flo had separation anxiety. We struggled to find someone who was able to help us but the situation quickly became very stressful for the whole family.

It got to the stage where Flo was visibly distressed even in the house and she started peeing in the house when we were there as she was terrified we were going to leave her. We have 2 children and we both work; life with Flo was becoming very difficult. We had never wanted to leave her for long periods and had used a dog walker on days she would be left but clearly it wasn’t enough, or right, for Flo. She would often mess and/or pee when she was left and had chewed the table and a basket by the front door on a couple of occasions. In desperation (and as a last ditch attempt before returning her to kennels), we called the first behaviourist we had spoken to in the hope that she would be able to suggest someone who could help and she recommended Ingrid. 4 months after adopting Flo, help was (finally!) at hand.

We did 30 minute training sessions with Flo 5 days a week, with 2 days off. They were hard going: picking up keys: putting on and taking off coats; putting on and taking off shoes – all of them multiple times to desensitise Flo to our “pre-departures cues”. The children quickly grew tired of the charade and usually had an argument at some point during the session which did nothing to help our stress levels. This had to work if we were going to keep Flo.

Our circumstances are possibly more complicated than many households as there are 4 of us and every day is different. We leave the house in a different order, with different bags, wearing different coats and shoes etc depending on what day it is. Sometimes we leave on foot, sometimes on bikes and sometimes in the car. There were a lot of pre-departure cues for Flo to get used to.

Progress was slow, painfully slow. However, progress is progress and Flo soon became much calmer when we were in the house. We got to the end of our 6 week block with Ingrid and we still hadn’t left the house during a training session. We hadn’t bargained on progress being this slow and questioned if we would ever be able to leave Flo on her own.

It took 2 months of training before we went out of the front door and a further 2 months before we could be out of the house for 5 minutes.

Ingrid had warned us to expect regressions but, to date, we haven’t really had any. However, we have had plateaus. They were less obvious initially – looking back, we spent a lot of time putting coats on and taking them off again to get Flo over that hurdle and we weren’t really able to progress much beyond going out of the front door for a long time but just getting to that stage seemed like massive progress. We built up the time we left her to 5 minutes and quite quickly from there to 20 minutes. Finally we had hope – but not for long. For the next month, we weren’t able to leave Flo for any longer than about 20 minutes without her starting to become distressed.

When I first spoke to Ingrid, I had asked if the method she uses always worked and she told me it had only not worked when people hadn’t followed the protocols. We had followed the instructions to the letter, we had medicated Flo (we really weren’t keen to use medication but felt we owed it to Flo to try everything) and yet, after 5 months of hard work, we still couldn’t leave her for long enough to actually do anything. We couldn’t keep a dog who could only be left for a maximum of 20 minutes. It wasn’t fair on the children – how often can you say that no you can’t go to the cinema or out for pizza etc because of the dog? Certainly not for the next 10 years. We had turned our lives upside down and been, in Ingrid’s words, “compliant with a capital C” – were we to be the first ‘failures’? We were heartbroken.

On my next video call with Ingrid, I told her how we felt. We knew Flo had made measurable progress, but it wasn’t enough. We had 2 weeks left of the block with Ingrid and, whilst we were desperate for it to work, we had to accept that it might not. We did the session as planned and Ingrid sent me home after 48 minutes whilst Flo snoozed on the pew in the hall (“end on a high”). It seemed Flo had done one of her infamous jumps.

Ingrid had told me that most dogs need 2 consecutive days off and need an easier day the first day back. Not Flo! It became clear that we could always push her a bit further after a day off and that 5 days of training in a row was too much for her so we modified the training accordingly.

At the time of writing (only a month after the jump), I have left Flo for 90 minutes 4 times in the past fortnight. After not leaving her at all for several months, 90 minutes seems like a very long time. It’s certainly a time we can work around and build upon. If she plateaus again (and we fully expect and anticipate that she will) then we can work around it until she is ready to progress.

IIf Flo had made exactly the same progress in a linear manner, I would have found it easier. However, if I have learned one thing from this process, then it is that no two cases of separation anxiety are the same, which is why it is simply not possible to predict how long it will take for a dog to improve. It is very hard to set even short term goals due the complete lack of predictability. For me, maybe that has been the hardest thing. Until very recently, I felt like we had entered into a process without any discernible end.

Final assessment – THIS IS NOT A PHOTO – this is snippet of Flo asleep – she stayed like this for one and a half hours!

We understand that separation anxiety will always be a part of Flo and we will probably never be able to leave her alone in unfamiliar places but it is part of who she is and, after all we have been through, that’s a compromise we can accept. Perhaps most importantly, we know that this isn’t a sticking plaster; the point of our months of hard work has been to solve a complex problem and restore some kind of normality to family life. Through our work with Ingrid, we have a solid foundation from which we can build and we know that she is there to support us if we need it.

Ingrid was very easy to work with. She was clear and direct in her instructions and working remotely is perfect for dogs with separation anxiety. Whilst guiding us through the training, she was sympathetic to the constraints of family life and addressed our concerns as they arose and was (and still is) only a phone call or email away. 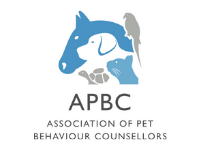