Milo’s Journey – Happy to be Alone 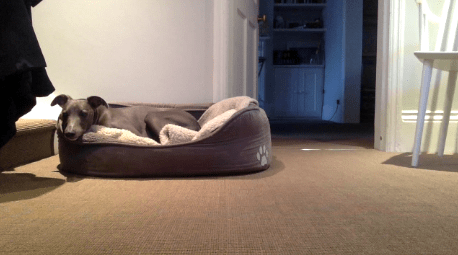 We re-homed Milo at 5 months old. He wasn’t a rescue but his owner couldn’t care for him any longer and we were lucky enough to get this nutty skinny blue boy.

Since we got him home that day, he was never happy to be alone. He would howl, bark and stand in the hallway staring at the door until we came home. We were lucky that he didn’t mess or destroy the house but he was clearly very distressed. Three and half years later, we had only been able to leave him four or five times but even then he was very anxious. This had a huge impact on us but we weren’t prepared to let him suffer and though the internet was a great source of advice there was nothing that seemed to work. Also, living in a flat, we were very worried about complaints about his barking and howling. In October 2017 we started working with Ingrid after she had been recommended to us. On his first assessment he did just 4 seconds before he started barking and howling. Ingrid filmed his reaction to us leaving and it was shocking and sad to see how distressed he was. Our goal was 90mins. This seemed a very long way away.

Ingrid started us off with baby steps. Lots of them. Up and down, in and out, backwards and forwards. 18 steps each time – 5 days a week. And she made sure we did the steps (they say training a dog is training the owner and we know that is definitely true!).

At first Milo barked, howled, followed us every time, up and down as much as we were. He was exhausted after a session. But slowly and surely we went from a few seconds to as much as 2 mins! Then from 2 minutes to 3 minutes and then to a whole 10 mins just before Christmas! We spent much of the Christmas season standing outside our front door, being very quiet, timing ourselves on a stopwatch whilst watching him on a video. Getting him to 10mins felt like a massive breakthrough – it took 2 months to go from 4 seconds to 10mins, but it really felt like progress.

After the New Year Ingrid kept the pressure up on us and rightly so. It is easy to flag. The commitment to 1 hour training 5 times a week is not easy. Every week – without fail. But we were determined to get our lives back and help Milo to be a happier dog. So we pushed on.

Milo was started to get the hang of it (or maybe we were?!). By early February we got him to 35mins. The 10mins on the front doorstep had turned into 35mins in the local pub for a quick half. We were making significant increases. Then he plateaued. In fact he went backwards. 10mins in and he would be at the door. Standing motionless like a statue – just staring.

So we had to go backwards with the steps. Shorter steps again, back to 2mins outside. It was so frustrating, especially after nearly 4 months of consistent weekly effort. We really wondered if this was just the dog he was.

But after 2 weeks of baby steps he started doing better. Quite quickly we were able to stretch the time. And from March to the beginning of May he went from 35mins to 90mins – that’s dinner out!

Our new goal is a movie – to be able to leave him long enough to go to the cinema. So a maximum of 3 hours. Though we stopped working with Ingrid once we got to 90mins, she is always available to help us when we get stuck. We are currently working on stretching the time to 105mins. Pretty sure he will do it and if he doesn’t, then we know now to go back and do a few easier sessions.

The perseverance and commitment to helping Milo has been significant for us. 6 solid months of 5 times a week is no small undertaking. Especially in the depths of winter and after a long day at work. But it has paid off. Milo is so much more relaxed and we know we can leave him and he is fine. We learned that he learns not to be scared slowly and in very small steps and we can work with that now. Most of all we learned to be patient. This was and will remain a long journey for Milo and us – but he will get there.

All along the journey Ingrid was there to help us, to keep us motivated and remind us that he is learning slowly but that he was improving. Having someone ensure you do the training is so important. Every session contributed to Milo moving forward and if we let it slip because we were tired, it meant that we weren’t helping him or us.

If you have a dog with separation anxiety, our top tips would be:

Commit fully to the training and don’t let it slip
Be patient and persevere – it will work in the end!
Get help from Ingrid.

Good luck to everyone else dealing with a dog who has separation anxiety – just keep going!